In an age motivated by consumerism, You Macbeth (A Disgrace to the Royal Crown) takes a refreshingly contemplative approach to modern jewelry. Flynn and James, the creative team behind You Macbeth, agreed to take some time out of their busy schedules and talk with LoveToKnow Jewelry about the You Macbeth philosophy, designs, future, and more.

You Macbeth: A Business Venture Rooted in Friendship

While James and Flynn attended Vassar College in New York, they became best friends. These two thoughtful and talented individuals draw from one another's creativity -- and their mutual interest in theatrical arts seemed the natural springboard for designing jewelry inspired by Macbeth, one of Shakespeare's most famous tragedies. (If you're not familiar with the play, you can go here for a synopsis). 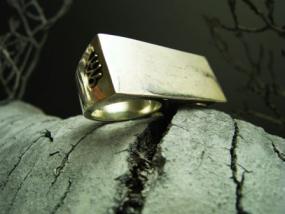 With her degree in English, Flynn was no stranger to Shakespeare's Macbeth. She was inspired by both the play itself and the meaning it conveys, struck by the way "Macbeth profoundly resonates tension in the name." James was similarly excited by the "weight that the name held," -- even those who haven't read the play may be familiar with the tragic hero's struggle with and desire for power. James and Flynn originally designed the rings as pieces for themselves, partially to compensate for the fact they didn't find rings in the current market that fit what they were looking for in terms of design, style, and meaning. The originality of the rings drew others. Flynn recalls, "People would stop and ask about them" -- and the growing interest spurred the pair to create You Macbeth.

Talismans for the Modern Age 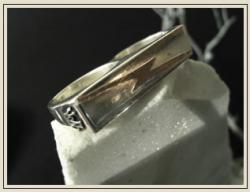 What exactly makes You Macbeth rings so unique and appealing?

First, the philosophy behind the rings makes them significant. As James suggests, "The rings are translatable to the modern age… [people are] lost but looking for something to lead them…" The You Macbeth rings, he conjectures, are perhaps appealing to people as a type of modern-day "talisman." The Macbeth muse that inspired the rings offers a constant reminder of the responsibilities of our own daily choices, but also of the ambiguities and complexities of life, and the paradoxes in which we often live.

The rings are striking in their deceptively simple designs. The rings trade the busyness epitomized in today's charm-bedecked handbags and rhinestone-encrusted cell phone faceplates for sleek, powerful designs. Other than the Insignia rings, You Macbeth's are double finger rings. This in itself offers a unique appeal. The rings are also substantial and quite heavy. As many people are pleasantly surprised to discover, Flynn laughs, "They are comfortable!"

Each of the rings in the You Macbeth collection is symbolic and reflects an aspect of the play. The rings are generally designed using either sterling silver or 18K peach gold. The unisex styles include: 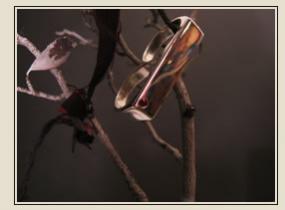 "Out, Out Damned Spot" with Ruby

The Power of Handcrafting

Each ring in the You Macbeth collection is hand-crafted, etched, and polished. Flynn comments that while people are often initially struck by the physicality of the ring itself, the hand-crafting is also a powerfully appealing aspect for potential buyers.

James contends that the hand-polishing is part of what allows the You Macbeth rings to "stand alone as great pieces." He relishes the fact that each of the rings is filled with humanity in that they are handled, rather than manufactured by a machine -- the craftsmanship put into the rings allows them to "absorb energy into them, absorb life in them."

The Future of You Macbeth

While You Macbeth has future plans for additional jewelry items, a furniture collection, clothing, and a skin care line, the designers are, as James confesses, "very protective of the brand focus we cultivate."

"We don't want to dictate a look," James comments. He says, in fact, "I would be horrified if someone bought a full collection of our jewelry [to wear as a set]." Instead, what Flynn and James are attempting to create with You Macbeth is, as they term, "lifestyle accessories."

"We want our pieces to be worn and used as part of [a person's] identity" James reveals, comparing this relational aspect of the rings to the way ocean glass is formed. The rings themselves are beautiful, yet they become even more so as they are worn.

You Macbeth Rings: Designed for Anyone 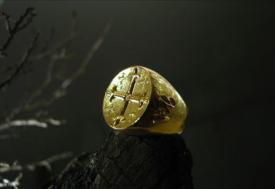 Excited at the prospect of reaching a "precise, detailed audience," James and Flynn quickly discovered that their rings have a virtually limitless demographic. Wearers of You Macbeth rings include anyone from "thirteen year-old-kids to wealthy women to rappers to museum curators," Flynn says. You Macbeth rings have become favorites among celebrities as well. A few examples of stars who wear You Macbeth include:

Where to Buy You Macbeth Rings

Stores that carry You Macbeth rings include various stores and boutiques in the California area, including:

You can also purchase You Macbeth rings by contacting the company directly by phone at 323-660-0172, by e-mail at Flynn@youmacbeth.com. Rings are made to order, and range in price from approximately $220 to around $3000.

The designers and staff will gladly work with those interested in purchasing the rings, and custom and specialty orders are also available (prices will vary).

LoveToKnow would like to thank James and Flynn for taking the time from this interview and extend them best wishes for the success of You Macbeth and all future endeavors.