Luxurious Tahitian pearl necklaces are coveted because of their unique beauty.

Tahitian pearls are a type of black pearl usually found in a range of rich grey or black hues. The pearls also reveal beautiful overtones of green, blue, purple, and more. The pearls, found in the waters surrounding the French Polynesian island of Tahiti, were first cultivated in 1965. The popularity of these pearls has since only increased.

Tahitian pearls are made from the pinctada margaritifera oyster. The black-lipped variety of these oysters can encompass a span of more than 12 inches. The resulting pearls can measure up to 18mm, although most commonly found between 8mm and 14mm. These pearls can be highly lustrous, but are also sensitive, and flawless Tahitian pearls can be very costly.

Necklaces are one of the most popular types of jewelry -- they are immediately noticeable and can offer a special touch to your ensemble, from dramatic to delicate. Tahitian pearl necklaces are prized because of their beauty and value. A wonderful combination of traditional and contemporary, Tahitian pearls make captivating necklaces.

Tahitian pearl necklaces vary in according to:

A Tahitian pearl necklace in the traditional style consists of a strand of Tahitian pearls usually strung using silk and closed with a clasp made of precious metal such as gold. Diamond accent and other specialty clasps are a current trend. The pearls are similar in size, shape (usually spherical), and luster.Colors may vary. Since the overtones on Tahitian pearls can vary greatly, a necklace consisting of same color pearls can be extremely expensive. A necklace with multi-tonal pearls may be less costly.

A graduated Tahitian pearl necklace is designed with a large central pearl or pearls, and the size decreases in increments towards the clasp of the necklace. This not only provides a lovely necklace silhouette, but can be slightly less expensive. 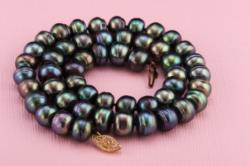 Tahitian baroque style pearl necklaces are pearl strands, but the shape of the pearls is what differentiates these necklaces. The drop-style or irregularly shaped pearls offer originality and unique beauty. Another benefit of baroque Tahitian pearls is that they may be considerably less expensive than a comparable necklace with spherical pearls.

Spaced Tahitian pearl chains are a popular look that melds traditional pearl strands with contemporary styling. A gold or other chain contains a number of Tahitian pearls spaced out evenly between lengths of chain.

Another popular way to showcase a Tahitian pearl is with a pendant. A Tahitian pearl necklace pendant is beautiful, original, and more affordable than a necklace made entirely of pearls. Tahitian pearl pendants are available in a variety of styles and make a wonderfully appealing accessory with many different types of clothing.

Gold and white gold are commonly used in conjunction with Tahitian pearls to create pendants. Diamond accents are also utilized with pendants to bring out the mirror-like sheen of the pearls. Pendants may be enclosed, drop-mounted, or part of a design such as diamond swirls, floral designs, teardrop shapes, or unique pendants such as white gold-dragonflies.

Prices vary depending on the quality or grade or pearls, the size, shape, and other factors. A typical strand of Tahitian pearls will cost several thousand dollars, while a single-pearl pendant may cost $250 or more.

When looking for necklaces, keep in mind: