Silly bands bracelets, a modern rendition of the popular 80s jelly bracelet fad, is a new craze sweeping the nation. Kids of all ages love these popular items of wrist wear.

What Are Silly Bands?

Silly bands, also known as animal bracelets or crazy bands, are thin silicone rubber bracelets in bright colors worn on the wrist. The original bands actually were not created for wrist wear at all; they were created by Japanese designers as a sustainable office supply product in 2002. BCP Imports' Livestrong wristbands distributor Robert Croak saw another side of these flexible rubber bands when he came across them on a business trip and began distributing them as children's fashion accessories in 2008. The bright, inexpensive novelties quickly became successful.

The key feature of the bracelets is that they are created in a fun or silly shape, such as animals, everyday objects, seasonal motifs, or letters. When worn, the bracelets look like a fitted silicone band, but once removed they revert to their original shape.

The original company that started the trend is Silly Bandz; however, there are a number of other companies competing for the market on this fun accessory. They are most popular among children and teens, but some adults are also interested in the bracelets, particularly those with rarer designs. The bands are often played with, traded, and collected.

The most popular way to wear the bands is on the wrist, and they are hardly ever worn as a single bracelet. Instead, most people wear several bracelets or even more. They are worn on one or both wrists or on the ankle, used in the hair as a hair tie, used as zipper pulls, or attached to a necklace. You can also use silly bracelets in any way you might use a normal rubber band. 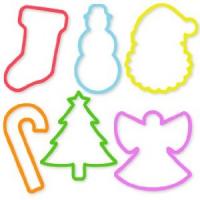 Not unlike other items in the world of fashion, silly bracelet collections are often sold in limited quantities. The companies regularly introduce new designs, and retired or limited versions become much more exclusive. Children often collect them just in terms of sheer numbers, to see how many different crazy band designs they can get.

Teens and adults, however, are usually more interested in rarer or unique bands. Among the top twenty rarest bands are celebrity silouhettes, hippie symbols, and Disney figures. Other rare designs include the following:

Various brands of the bracelets are sold in many brick-and-mortar and online retail shops. Check accessories and novelty stores, toy stores, children's clothing stores, mass merchants, and discount stores. You can also purchase some brands directly from the manufacturers' websites. In addition to various designs in bright colors, you can also purchase tri-colored, tie dye, and glow-in-the dark versions. The bands are sold in packs, typically with 12, 16, or 24 bracelets in the package.

Stores that specifically carry the rubber wrist wear include the following:

In addition to the original Silly Bandz brand, there are a number of other manufacturers of shaped rubber band bracelets. Designs, styles, colors, and number of bracelets per package may vary according to brand. Here are a few of the popular manufacturers:

Since the rubber bracelets are quite fitted to the wrist when worn, there is a possible health danger of impeded circulation. Experts suggest that the bracelets not be worn for very long periods or overnight. Wearing excessive numbers of the bands also increases the risk that they could constrict blood flow.

In order to keep children focused on learning and avoid any possible health issues, many schools have banned silly bands from being worn during the school day.

Call them crazy, funky, zany, or goofy, but the silly bands trend is one fashion fad that is just plain fun. While parents should monitor the use of their children's bracelets to reduce health risks from the fitted bracelets, these fun accessories can spur the imagination and foster communication, making them more than just a fashion piece.