Well-known for its luxurious luminescence and brilliant white color, platinum jewelry has been worn by princesses, aristocrats, and debutantes alike. Particularly popular during the turn of the 20th century, platinum was used to create delicate, wearable works of art. While platinum is a great material to have your jewelry made out of, it's not perfect for every person. So, take a look at this legendary metal and explore why it took the world by storm just over a hundred years ago.

Platinum is a precious metal whose archaeological roots date back to Ancient Egypt. While platinum is currently mined all across the globe, yields are still small enough for it to be considered a particularly rare natural material. The most identifiable characteristic of platinum is its bright white coloring; rhodium-plated white gold is the main visual competitor to platinum currently on the market, though platinum alloys like palladium do bear a strong, if off-white, resemblance.

How Is Platinum Used in Jewelry?

Platinum is used in quite a typical fashion in the jewelry making process, often included in rings and necklaces because of both its durability and its coloring. Historically, platinum has been mined and used by elite jewelers for the purposes of royal decoration and aristocratic finery. While platinum has been actively used in jewelry making for hundreds of years, the contemporary market for antique Edwardian platinum is particularly high. These pieces can be worth tens of thousands of dollars depending on their craftsmanship. 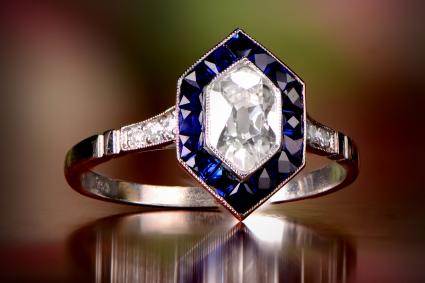 All contemporary platinum and most vintage platinum will be marked to indicate that it's authentic. Most platinum contains at least 85% of pure platinum within its compound structure, though percentages can reach as high as 99.9% purity. In comparison, 18k gold is only 75% pure and 14k gold is only 58% pure. Look on the inside of your platinum rings, bracelets, clasps, and broaches for three separate markings: Platinum, PT, and Plat. Each of these is viewed as giving the jewelry an official stamp of approval. In addition, numerical listings on your pieces - like 999 or 950 - describe the platinum's purity percentages. Platinum jewelry with 999 inscribed equals a 99.9% pure platinum content.

Aside from its color-quality, platinum creates incredibly fine jewelry that many people love because of a few different reasons.

Although platinum isn't indestructible, its strength surpasses gold and silver making it a good metal to surround your semiprecious and precious stones in.

Due to platinum's level of purity based on the amount of pure platinum used in each piece, the metal is well-known for being safe for people with metallurgical sensitives like with gold and nickel.

As with all metals, platinum develops a natural patina over time, though not nearly as quickly as silver does, that can easily be washed away with proper cleaning; however, this patina does add a sense of depth to the pieces that some people really enjoy.

If you're looking for jewelry that has a lot of weight/heft to it, platinum is the metal for you, seeing as it's anywhere between 40-60% heavier than 14k gold. 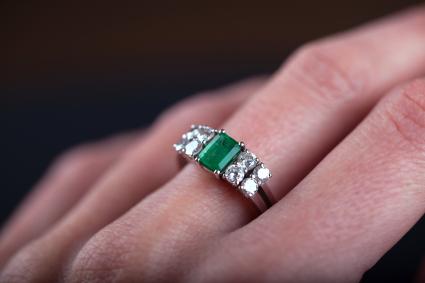 Though it may seem as though there's no conceivable reason to not choose platinum jewelry, there are a few good incentives out there that could encourage you to choose a different metal.

According to the USB forecast, platinum will rise to be worth $1,250 per ounce by the end of 2021, which is significantly higher than silver, though similar to the price of gold, making it a metal that's not particularly affordable for most people.

Considering that platinum has a higher melting point than gold or silver at 1,769°F, any repairs that need to be made to a setting or a band/chain will be quite lengthy and expensive since all of the jewels, if any are set into the platinum, will need to be removed and placed back into their settings.

Despite platinum's reputation for its ethereal coloring, rhodium-plated white gold creates a near-identical white color; so, if you're looking for that specific color, white gold is both a cheaper and beautiful option.

Platinum is an incredibly resistant metal, making it much easier to care for and clean than other, more delicate, materials. Since platinum is particularly durable, it's not as susceptible to obvious scratches and dents as softer metals are, meaning that platinum jewelry is perfectly poised to withstand the negative effects of the wear and tear of aging. That being said, you'll definitely need to have your platinum professionally assessed at least once a year to ensure your pieces are being properly cared for. Given platinum's purity, you can easily care for it at home by simply washing your pieces with a mild soap and warm water. In fact, because of its purity, platinum doesn't need to be cleaned nearly as often as other metals do.

Platinum is an all-around great option for all of your jewelry needs because of its lasting shine, unique and natural coloring, and its hypoallergenic quality. However, platinum's rarity does make it one of the most expensive metals on the market, and repairs to platinum jewelry can be costly, making the metal a luxury that many people can't afford. Yet, there's no denying that platinum looks like pure perfection.

Comments
© 2006-2021 LoveToKnow, Corp., except where otherwise noted. All Rights Reserved.
Platinum Jewelry for a Timeless Look