Fans of the movie Titanic have all wondered what became of the original Heart of the Ocean necklace. The beautiful blue diamond necklace served a crucial plot point in the romance between the lead characters and the tragedy of the ill-fated Titanic voyage. Replicas of the necklace are still popular today.

The Heart of the Ocean necklace was a fictional priceless jewel that was created exclusively for James Cameron's 1997 movie, Titanic. The necklace worn by Kate Winslet's character in the film was an impressive prop that resembled a real 56-carat blue diamond surrounded by white diamonds, hung on an 18 inch white diamond-studded chain.

In the 1943 film, the blue diamond jewel, like the Heart of the Ocean, was also an important plot point. The 1943 film jewel had a dramatic impact on a romance between lead characters and symbolized the loss of love and life in the Titanic tragedy.

Location of the Original Necklace

The Heart of the Ocean necklace made by Asprey & Garrard was sold at a charitable auction for $1.4 million with the condition that it be worn by Celine Dion at the 1998 Academy Awards. The necklace was eventually donated to the Charlestown Shipwreck Treasure Musem (formerly the National Shipwreck Museum) in Charleston, Cornwall, UK where it remains on display today.

What exactly happened to the Titanic necklace movie prop worn by Kate Winslet? No one has ever publicly commented on its whereabouts.

Heart of the Ocean Necklace Replicas 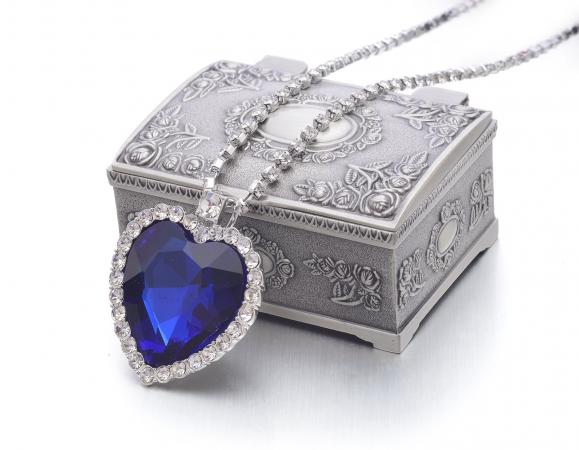 A number of jewelers created high quality replicas of the Heart of the Ocean necklace soon after the release of the 1997 film. Many replicas are fashion jewelry made of Swarovski Austrian crystal and are quite affordable to the general public ranging in price from $25 to $80.

There are also some fine jewelry replicas that costs thousands of dollars. The most famous fine replica was a $20 million necklace created jeweler Harry Winston. Actress Gloria Stuart, who played the elderly Rose DeWitt Bukater Calvert, wore a 15-carat blue diamond replica of the Heart of the Ocean at the Academy Awards ceremony.

How to Find Titanic Necklace Replicas

Heart of the Ocean necklace replicas are still available online and in many collectible stores around the world. Replica prices vary depending on the quality of the materials used. Prices range from as low as $25 to over $5,000.

The following online retailers sell Heart of the Ocean replicas:

The Heart of the Ocean necklace appeals to both fans of the movie and hopeless romantics everywhere. Replicas of the necklace make great Valentine's Day gifts or any occasion when someone wants to give a romantic gift to a loved one. This necklace is as much of a classic as the movie.