Medieval necklaces evoke images of nobility and clergy from an era long past. If you love opulent jewelry, you may find something in this genre to suit your fancy.

Prior to the Medieval Age, jewelry simply wasn't as important as it had been in previous eras. Fashions had become quite conservative, extending from high necklines to fingertips and toes, leaving little space to display precious metals and gems.

Changes in fashion coupled with jewelry brought back from Byzantium during the Crusades inspired craftsmen to create elaborate pieces considered worthy of the nobility, the only people who could afford them.

Many of the finest jewelry craftsmen were actually monks. Not so surprisingly, this led to a surge in the use of religious imagery in jewelry making, including the cross and icons of the saints.

Rosaries and chaplets also became much more extravagant in their design. Simple knotted cords gave way to gorgeously beaded chains made from precious stones and pearls.

Medieval jewelry was also used to denote rank among the ruling classes. Large medallions hung on chains or ribbon became signs of official office for a king's appointees; signs that could be stripped away just as easily as they were given. Rings of this time often served multiple purposes. Although certainly designed as adornments, they were often engraved with the owner's initials or coat of arms, and used as seals on important documents and communications.

As jewelry manufacture flourished during the Middle Ages, nothing else quite compared to the creativity and craftsmanship that went into the production of Medieval necklaces.

Necklaces of this period were true show pieces, far more elaborate than most of the pieces created by modern day craftsmen. Precious metals like gold and silver were used in abundance and engraved with intricate designs. Pieces were then decked with as many precious stones as they could possibly hold, in an array of color combinations.

Geometric designs were the basis for most Medieval necklaces. Large medallions were encrusted with all kinds of jewels on both sides, and many carried inscriptions of prayers the wearer hoped would help gain entry to heaven.It was also popular to engrave medallions with images of mythical beasts like dragons and gryphons.

Amongst all of nature's riches, no material was so prized by Medieval jewelry makers as the pearl. Strand after strand of pearls were draped together to form intricate chokers and full collars fit to be worn by queens.

Celtic knot work was also very popular during this age, and many fine works were created using silver as the medium. One of the best examples of this work is the Celtic trinity knot, comprised of a series of unending knots that jut out in three distinct points.

Some of the religious necklaces of the era were actually reliquaries. These pendants featured small compartments that could be filled with relics from a saint or small vials of holy water. Eventually, reliquaries gave way to lockets meant to hold images of loved ones.

Pomanders were commonplace in the Middle Ages. Elaborate, silver filigree balls were strung on chains and worn around the neck. The balls were used to hold aromatic herbs like sage and lavender to overpower the scents of filth that were so prevalent before modern day plumbing and sewage systems were developed.

Cameos were also highly regarded by the nobility. Silhouettes carved from bone, coral and other materials were surrounded with pearls and hung around the neck with ribbons. 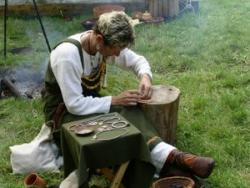 Many modern day jewelry enthusiasts still have a love for Medieval necklaces, and there are plenty of fabulous reproductions on the market. Let's take a look at a few.

By today's standards, many Medieval necklaces might be considered garish, but their influence is still felt in modern jewelry design. With so many reproductions available on the Web and at specialty shops and Renaissance fairs around the globe, Medieval jewelry will likely maintain its popularity in ages to come.