When you start shopping for a tourmaline necklace, be prepared to be inundated with a wide variety of colors, shapes, and styles. According to Gemstone.org, these gems often have two or more colors and range "from red to green and from blue to yellow," but green tourmalines are "particularly popular." Jewelry designers create interesting, one-of-a-kind pieces that highlight the color and optical properties of this variegated gem.

Tourmaline gems are cut to maximize their color or a unique, intrinsic characteristic of the gemstone while retaining maximum weight. Tourmaline rough (unpolished gems), which usually grow in long crystals, change color when viewed from different axial directions. This is a phenomenon called pleochroism. Cutters evaluate rough to determine the best way to unleash a tourmaline's beauty.

The rough is cut across the crystal structure (think of slicing through a meatloaf) and then polished on both sides of the slab. The pink tourmaline nestled inside the green tourmaline resembles a slice of watermelon, and it's a great example of this gem's uniqueness. Slabs are usually bezel set, which means a strip of metal borders the gem. The metal of choice is usually 14k or 18k yellow gold, but sterling silver is often used with less vibrant colors. 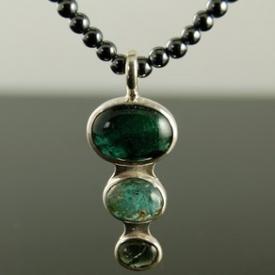 Tourmalines are cut into cabochons to display interesting particles trapped inside the crystals. Particles, or inclusions, are frowned upon in diamonds, sapphires and rubies, but they are valued in tourmalines, and gem cutters look for ways to flaunt them. A cabochon-cut gem has a flat bottom and a polished, domed top, and it's usually bezel-set.

The cabochon pendant pictured here displays the varying colors and transparencies of green tourmaline. The gems are more opaque due to the inclusions, but they create an interesting and unique pendant. 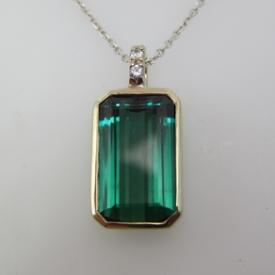 Tourmalines with clear transparency and few visible inclusions are usually faceted, which means they have numerous polished, flat surfaces. Faceted tourmalines with vibrant color and few inclusions can fetch prices that are almost comparable to the finest sapphires, rubies and emeralds. Tourmaline crystals grow in a long, narrow crystal structure, so rectangular shapes are common.

Chrome tourmalines, like the one featured in the faceted tourmaline pendant pictured here, are sought after for their rich green color, which rivals the green normally attributed to emeralds.

Chrome tourmalines traditionally hail from Brazil, but those mined from Tanzania are just as vibrant. These gems are usually expensive - near the thousand dollar range for a loose gem - and are typically mounted in a precious metal such as 14k or 18k yellow gold or platinum. 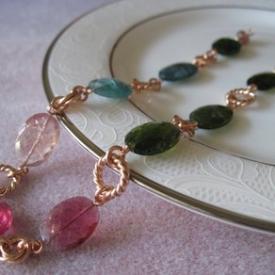 Tourmalines can also be round or oval, and less expensive ones that are either too dark, don't show deep enough color or are opaque are often polished into beads. The beads are then strung on wires or silk to create a fashionable necklace like the one shown here.

Bead necklaces are usually purchased according to the millimeter size of the beads and the length of the piece, which is typically 16 to 18 inches or longer. Miner's Minerals, AliExpress and Etsy are good places to find strands of round tourmaline bead necklaces priced around $25 and up. 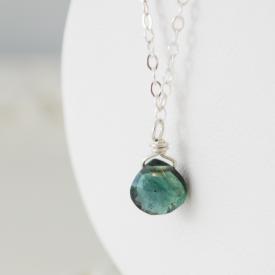 Tourmalines are often left in a rock-type shape and given an all-over polish referred to as tumbled. Tumbled tourmalines are interesting from any angle due to unusual inclusions captured within the gems or their pleochroism.

Tumbled tourmalines are inexpensive and are often paired with a less expensive metal like sterling silver, such as the pendant pictured here. It is available for $35 from Etsy. This type of necklace generally costs between $20 and $100.

Purchasing a necklace in person gives you the best opportunity to examine the gems and decide if they meet your expectations before you spend any money. However, you'll find a wide selection of lovely tourmaline necklaces online.

A Gemological Rainbow at Your Fingertips

Tourmaline is a darling of the gem world because it comes in every color, as well as every shade of each color. The inclusions and unique optical properties of these gems make the jewelry they're set in true conversation pieces worthy of anyone's personal collection.