Many gemstones have an interesting story behind them, and aquamarine is no exception. For instance, have you ever wondered how aquamarine got its name or what gives it that special color? Learn some key aquamarine facts and get up close and personal with this precious gem.

15 Aquamarine Facts as Colorful as the Stone

You may already know a few of these facts about aquamarine, but some will probably be new to you. If you're a fan of this gemstone, it's all very fascinating. There really is nothing not to love about the beautiful aquamarine gemstone.

Its Name Represents the Ocean

The name aquamarine is reflective of the stone's physical properties. The term aquamarine is derived from the Latin words aqua and marina, which means water and sea respectively. The color of the precious gem can be described as somewhat similar to seawater. Over the years, the stone has been widely associated with legends and folklore referring to the ocean waters, giving it more of a connection to the vast bodies of water.

Aquamarine Has Many Shades

Aquamarine is well known for its distinctive blue-green color as well as its clarity to the naked eye. Shades range from deep teal to a pale, crystal blue. The depth of color is actually influenced by the amount of iron found in each gem's structure. The fluctuating iron levels are why the color varies so much from stone to stone. Darker-hued blues and greenish-blued tend to be the most valued of the aquamarine stone.

Many aquamarine gemstones are heat-treated to bring their color closer to a true, vibrant blue. This color change is permanent, but it doesn't harm or otherwise change the structure of the stone. Heat-treated stones should be clearly marked as such, and they are often lower in price than natural stones with the same hue.

It Once Had a Different Name

Today we know this translucent, blue-tinted stone as aquamarine, but this wasn't always the semi-precious stone's name. Hundreds of years ago, it was referred to as sea-green beryl. The first evidence of it being called aquamarine was back in the early 1600s.

Aquamarine has long been thought to protect people. Sailors at sea believed in its guarding abilities, and many believed for generations that this stone has the power to bring them safely back home. Decorative jewelry and protective amulets dating back to 500 BC have also been uncovered, proving that many groups of people across time had similar thinking regarding the gemstone.

According to other folklore-based traditions, aquamarine has the power to: 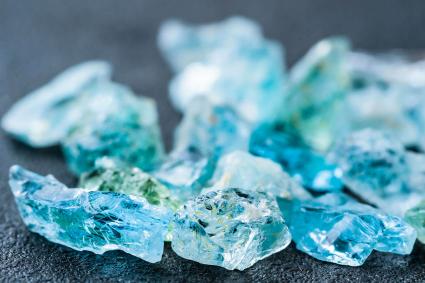 It seems there is nothing aquamarine stones can not do if you believe the folklore and ancient behavior and rituals. Some people believe in the natural healing powers of crystals, and they use aquamarine to help alleviate symptoms of stress or use them as worry stones as many believe that aquamarine stone creates peace, calm, and tranquility.

The Romans believed that the magnificent stone could cure medical ailments like problems with the liver, stomach, and throat, and reduce fluid retention. Healers in the middle ages used it to get rid of toxins in the body.

It Was Sacred to Neptune

The ancient Romans believed that Neptune, God of the sea, had a special affiliation with aquamarine. According to legend, Neptune obtained the stone when it fell out of the sirens' jewel box and washed up on the shore. These beliefs helped further the notion that aquamarine provides protection for sailors because, surely, Neptune wouldn't want these jewels to disappear back into the sea.

It Has Significance for Many

Aquamarine has much meaning to many people around the world. For those born in March, aquamarine is their birthstone. It officially became so in 1912. For couples who have been hitched for many years, aquamarine is the traditional gift for a 19th wedding anniversary. This gift may have just about anything to do with the color aquamarine, but it was originally meant to be aquamarine jewelry.

There Are World-Famous Aquamarines

The largest aquamarine known to date is called the Hirsch Aquamarine. It measures an impressive 109.92 carats and is completely free of any heat-treating or color enhancements. The stone is set in 18K gold and accented with 118 diamonds.

It Is Related to Emeralds

Both emeralds and aquamarine are members of the beryl variety of gemstones, and many people are unaware that these stones are so closely related. Emeralds are the rarest and precious of the beryl gemstones because they are more fragile, however, fine examples of aquamarine are also highly prized. Another beryl closely related to aquamarine is the golden beryl. The two stones are often found together in the same deposit. What makes the golden beryl different from aquamarine is the inclusion of uranium in the stone, alongside the iron.

Aquamarine Can Be Damaged

Unlike a diamond, aquamarine stones can become damaged and scratched up. You should take care and never store your aquamarine jewelry next to a gem that has a harder surface. These stones should also only be washed in warm water, not hot water, and avoid any hard chemical treatment. Also, be sure to keep this stone away from intense heat.

It Was Used for Corrective Eyewear

People associate aquamarine with jewelry, but not with corrective eye lenses!. In Germany, the aquamarine stone had a use that extended past beauty and decor. The stone was used in eyeglass lenses to help correct shortsightedness. Too bad this practice has fallen to the wayside. Who wouldn't want a flashy pair of glasses made of this stunning stone?

It Is Moderately Hard

Aquamarine registers between a 7 and an 8 on the Mohs scale. This is the unit of measurement that is used to test the hardness of different kinds of gemstones. In comparison, a diamond measures 10 on the hardness scale, so aquamarine is relatively hard and will withstand daily wear.

The clear nature of this gemstone lends itself nicely to faceting. This means that the surface of the stone is cut with many tiny individual cuts or "facets" that reflect the light and make the stone sparkle. Aquamarines are sometimes cut as a cabochon, and this cut looks particularly lovely with darker-colored stones.

In some cases, beryls, including aquamarines, are formed with hollows or in layers where foreign mineral aligns within the deposit. In these cases, when the stone is cut, it forms chatoyancy, which is also known as the cat's eye effect.

It Is Mind Around the World

Aquamarine is mined in many countries across the world, including Brazil, Zambia, Nigeria, and Madagascar, as well as Pakistan and Mozambique. Many of the gem-quality examples of aquamarine are mined in Brazil, and these are the stones commonly used in jewelry. Stones of a different shape have also recently been found in China. These aquamarine pieces are flat and hexagonal, and they're much less expensive than those found in other countries.

Colorado is also famous for its aquamarine quarries. This state produces some of the finest aquamarine examples in the entire world. Colorado officially recognized the aquamarine stone as the state gemstone in 1971.

Aquamarine Is Popular in Jewelry

The uses of aquamarine in jewelry are extensive. It makes lovely rings, pendants, and earrings and looks stunning when set into sterling silver. Aquamarine also looks great when it's set in white gold because the cool white of the metal sets off the light blue color of the stone. 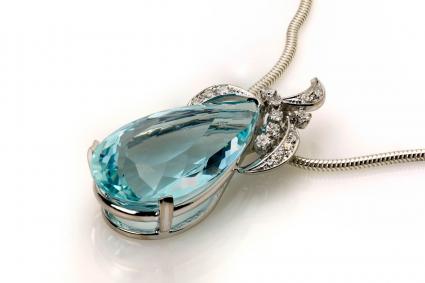 Whether you are lucky enough to have aquamarine as your birthstone or you just enjoy the stone for its natural beauty, think about some of these facts the next time you encounter this gem. They will give you new insight into this captivating stone and, hopefully, a greater appreciation for it.