Celtic jewelry is rich in tradition and design, but it's the history of Celtic symbols that makes these pieces so special. Since Ireland is absolutely overflowing with legends and traditions, many of these have been preserved as symbols incorporated into jewelry and passed down from one generation to the next.

Ireland may be known as the Emerald Isle, but most Irish jewelry does not depend on gems -not even emeralds- for its appeal. Instead, most pieces are intricately carved works of silver or gold that seldom suffer for their lack of jewels. Many of these jewelry styles are based on traditional Celtic themes and legends.

Knots abound in Celtic lore, particularly the never-ending knot that signifies the continuity of life. Careful examination of the knot design never reveals a beginning or an ending point. The knot simply loops around itself continuously.

A single knot consisting of three loops often symbolizes the Christian Trinity. You'll see Celtic knots in all types of Irish jewelry, and they are also very popular as tattoos.

Shamrocks have long been used as a symbol for the Christian Trinity. Legends claim that St. Patrick plucked one from the ground and used it to teach the Irish about the triune nature of God the Father, Christ the Son, and the Holy Spirit.

Today, shamrock jewelry still carries religious significance for some, but many people look upon these little green plants as symbols of good luck.

The Celtic cross is a variation of the Christian cross, but it actually predates it. The Celtic version includes a circle that unites the arms of the cross.

These shields are symbols of Ireland's often violent history and struggle for autonomy. These designs are typically used in men's rings.

Shields are usually quite simple in design, consisting mainly of a metal disc with just a bit of carving around it, although some styles incorporate mythical creatures like dragons.

The Gimmel is a piece of Celtic jewelry that marks betrothals and engagements. A Gimmel is a series of three joined rings. Upon betrothal, this ring was separated into three pieces. The bride-to-be retained one piece, the future groom another, and the last piece was held by the person who would stand as witness to the betrothal. When the wedding finally took place, all three sections of the ring were rejoined and became the bride's wedding band. 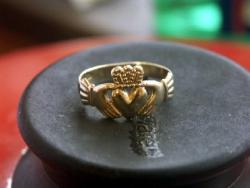 The Claddagh is by far the most popular and enduring tradition in Celtic jewelry. The design is simple, yet very symbolic. Two hands representing friendship hold a heart while supporting a crown, which signifies loyalty.

The story behind the Claddagh is a romantic one. An Irishman named Richard Joyce was abducted while fishing near the village of Claddagh in the very same week he was to be married. Richard was sold into slavery to a wealthy goldsmith who taught him the trade. Eventually, Richard managed to escape and return to his sweetheart. The two were married, and Richard went on to design the now famous Claddagh rings.

There are several ways to wear Claddagh rings:

The Claddagh has become so popular that it's also been incorporated into bracelets and jewelry. You can find Claddagh jewelry at websites like The Irish Store.

Many pieces of Celtic jewelry are designed with a swan motif to remember the legend of the Children of Lir. The story goes that Lir's children were changed into swans by their stepmother, who was a witch. The stepmother told the changelings that they would spend nine hundred years as swans. The only way the children could end the spell was by hearing the bell of the new God, meaning the beginning of Christianity in Ireland.

The story has passed into legend, but swan jewelry is still a strong tradition in Ireland.

No matter which type of Celtic jewelry you choose, you'll be wearing an important symbol of your Irish heritage. With so many options to choose from, your perfect Celtic ring, necklace, or other piece is out there waiting for you.