Cameo jewelry was incredibly popular during the Victorian era, approximately 1837 - 1901. As one of Queen Elizabeth's favorite types of jewelry, the popularity of the cameo naturally coincides with her reign. This era is also when the profile, rather than other designs, became the most popular for cameos.The ancient intaglio as an item used as a seal or marker, a piece with a hollow carving, was the forerunner of cameo jewelry. In the fifteenth or sixteenth century, a different process was introduced; cameos, which are raised, rather than hollow, pieces. A design is engraved or carved in the top layer of stone, shell, coral, lava, or other material. The excess is carved away, revealing another layer and placing the design in relief.

A Return to Vintage

Although some have always loved vintage jewelry, a return to cameos and other vintage pieces has surged in modern times. The unique beauty of cameo jewelry has captured the hearts of occasional jewelry wearers and jewelry lovers alike. In addition to purchasing vintage cameos, there are many vintage-inspired pieces available for sale today.

Typically cameos feature the profile or design in a white, cream, or light shade, while the revealed layers are darker -- often black, blue, bronze, rust, or pink, depending on the materials the cameo is made of.

Special artistic cameos, however, are also designed using full-color reliefs, or various accents of color to brighten and accentuate parts of the design. 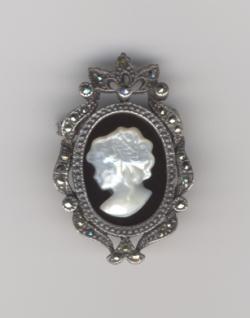 Although the profiles of the Victorian era are often thought of in regards to cameo jewelry, there are also dozens of other designs available. The earliest cameos, in fact, depicted a variety of designs such as ancient gods and goddesses. You can find cameos with designs of:

For pet lovers, there are a variety of jewelers specializing in cameos that can even create custom pieces featuring your pet. Cameo accessories featuring astrological zodiac signs are also a popular contemporary option.

Cameo designs are usually affixed to jewelry made in yellow or white gold, or sterling silver. Gem stones and pearls are sometimes added to embellish the designs.

Although the oval is a classic cameo jewelry shape, there are many other shapes cameos are designed in, including squares, teardrops or pears, rounds, turned ovals, and hearts.

As with most jewelry, costs for cameo pieces vary depending on a variety of factors. Vintage pieces are usually more costly than vintage-inspired pieces, but the level of artistry and fine materials available today also come into play. The type of jewelry the cameo is affixed to, any additional jewel or pearl embellishment, and whether the item is custom-designed or a stock item also affect the cost.

You can purchase a small, vintage-inspired silver cameo pin for less than twenty dollars, but finer cameo pieces will cost considerably more. A large, sardonyx pendant crafted by a master Italian jeweler, for example, can cost well into the thousands of dollars.

Although some jewelers may carry cameo accessories, you may have to search specialty jewelry stores for the cameo jewelry you want.