Beautiful black pearls are some of the rarest found in nature. In fact, one would have to open over 10,000 oysters in order to find a single natural black pearl. Fortunately, today these unique pearls are easier to come by, thanks to the culturing process, and more people can enjoy these stunning gems.

Where to Buy Black Pearls

Black pearls are available from jewelry stores, department stores that have fine jewelry departments and online specialty retailers. If you are interested in purchasing a pair of black pearls for yourself, check with both chain and locally-owned jewelers in your community to get an idea of what options are available. Prices vary greatly, from less than $100 for a short strand of lower quality (yet still beautiful) pearls to several hundred for those of those highest quality. You may want to go ahead and purchase a strand from a traditional store in your community, or shop online to see if you can find a better deal. A few online black pearl resources you may want to consider include the following: 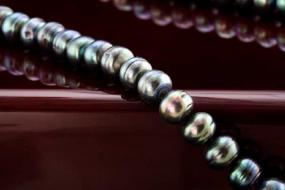 How Black Pearls are Formed

The oyster named pinctada margaritifera, commonly called the black-lipped oyster, is the source of black pearls. To form cultured pearls, the pearl farmer must first insert a bead of mother of pearl along with a bit of mantle tissue in the oyster. This process is called nucleating. This irritates the oyster, and in an effort to lessen its discomfort, it covers the irritant with nacre, the same substance it uses to coat the inside of its shell, resulting in a pearl. Pearl farmers usually wait at least two to three years after nucleation before harvesting in order to allow the oyster to build up several coats of nacre on the pearl. After removing the pearl, the pearl farmer can return the pinctada margaritifera oyster to the water, to allow it to recuperate before nucleating it again.

The oysters that create black pearls tend to be more delicate than other pearl-bearing oysters. It is difficult to raise them to maturity, and only roughly 30 percent of the oysters that have had an irritant introduced in them produce a pearl. Furthermore, these oysters die easily and cannot live in polluted environments - only the most pristine waters can successfully host pinctada margaritifera oysters.

In the early 1960s, the first cultured black pearls were harvested in French Polynesia, and pearl farms soon sprang up on several Polynesian islands. Today pearls are French Polynesia's biggest export and are vital to the area's economy.

It is a popular assumption that all black pearls are Tahitian pearls, but this isn't so. While it is true that the majority of these pearls hail from Tahiti, pinctada margaritifera oysters are found in other areas of the Pacific as well as French Polynesia, including the Cook Islands, Japan, Samoa, Philippines, Tonga, the Gulf of California and Panama. Only pearls that come from French Polynesia should be called Tahitian pearls, though many mistakenly apply this name to all black pearls.