People with fall birthdays will be interested in learning about autumn birthstones. Birthstone symbolism has intrigued people for generations. The birthstones for the autumn months have fascinating histories and lore that will appeal to those searching for a meaningful birthday gift.

The autumn birthstones cover the months of September, October and November. The birthstones for the fall months are as follows:

Each gemstone has a symbolism that influenced its selection for the month it represents. The idea is that a birthstone's meaning also represents aspects of a person born in the corresponding month, much like zodiac sign characteristics.

The American National Association of Jewelers, Jewelers of America created the official list of modern birthstones in 1912.

The sapphire is a part of the mineral species corundum. The name sapphire is derived from the Persian word, safir, and translates to beloved of Saturn. Modern sapphires come from mines in Sri Lanka, Thailand and Australia. While blue is the most popular color for a sapphire, the gemstone actually occurs in nearly every color except for bright red. In fact, blue sapphires are the ones mentioned most often in lore.

In the Bible, the ten commandments were on tablets of sapphire. Perhaps this is why it came to represent sovereignty and a divine right in many ancient traditions. Blue sapphires were worn by kings and members of religious orders. The British crown jewels contain priceless large blue sapphires.

Sapphires also symbolize sincerity, loyalty and faithfulness. The gemstone is often used in engagement, wedding and anniversary jewelry because of this symbolism. 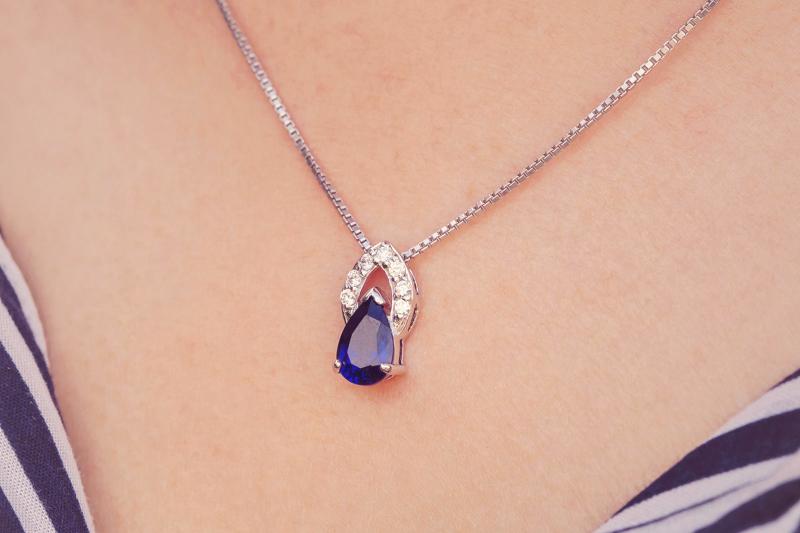 Opal: The opal can trace its lineage to the Cretaceous period during the time of the dinosaurs, formed from silica and water. Opals come in many colors such as blue, white, pink, fire orange and a rare black. Blue opals are the popular variety, known for its pale color with fiery flashes of blue. It is a gemstone with a rich lore in many cultures. The Romans considered opals to be a symbol of hope, love and purity. They used it to heal the sick. The Australian Aborigines consider it a sacred gemstone that contains the spirits of departed loved ones. The ancient Arabs believed opals fell from heaven when lightning flashed.

Opals are said to represent faithful love. It is also a stone of healing and protection. It enhances communication ability. The opals are also associated with creatures of the sea like mermaids and dolphins.

Opals were used in many Victorian and Art Nouveau jewelry pieces. The stone is still a popular jewelry choice today.

Tourmaline: There is an ancient Egyptian legend that claims that tourmaline went on a journey through the center of the earth and along the way, gathered all the colors of rainbows. Tourmaline does come in many color variations and combinations. The most striking is a green and pink combination known as watermelon. It comes in the colors green, watermelon, champagne, pink and black.

Tourmaline represents joy and healing. It was the traditional birthstone for October prior to creation of the modern list that included opal. You can find great vintage and antique tourmaline jewelry pieces. It is still a classic jewelry choice.

Yellow Topaz: Yellow topaz, also known as imperial topaz, is a fluorine aluminum silicate. The stone is thousands of years old and is found in Germany, Brazil, Sri Lanka and Australia. Topaz is considered one of the sacred stones because a topaz is one of the gemstones on the gate of the Holy City of New Jerusalem. The Bible also refers to topaz as one of the twelve breastplate stones of the high priest in the Book of Exodus.

A symbol of peace and forgiveness, topaz is also considered a soothing gemstone. There are striking birth stone jewelry selections in topaz.

Citrine: Citrine is a type of quartz that comes in many colors that range from yellow and yellow-orange to orange-brown. It comes primarily from Brazil, a number of African countries and Bolivia.

Sometimes called the stone of mind, citrine has been used for metaphysical purposes for cleansing the mind of negativity. It helps bring about self-awareness, happiness and optimism.

Today some of the older alternative autumn birthstones are regaining popularity such as Ayurvedic and mystical birthstones. These stones are more unusual selections and many birthstone jewelry gifts feature information on the folklore. The idea is that wearing the gemstones will impart the stone's power or meaning to the wearer.

The Ayurvedic birthstone list has origins that trace back to ancient India. The birthstones were selected based on early holistic medicinal practices and spiritual beliefs.

Here is a list of autumn Ayurvedic birthstones, listed with the gemstone meaning:

The mystical birthstone list is based upon ancient Tibetan lore. The Mystical autumn birthstones, listed with their gemstone meaning, are:

Birthstones have a long and rich history in many cultures. Autumn birthstones are among the gemstones with some of the most interesting symbolism and lore.

Related & Popular
Is Sarah Coventry Jewelry Still Available?
By Adrienne Warber
November Birthstones: Behind the Beauty of Topaz and Citrine
By Megan Cooper
October Birthstones: A Colorful Guide to Opal & Tourmaline
By Kristin McCarthy
50 Positive August Quotes for the End of Summer
By Mary Gormandy White
Antique Lockets: Guide to Pieces of the Past
By Adrienne Warber
Examples of Art Deco Jewelry: A Timeless Style
By Kate Miller-Wilson
10 Costume Jewelry Watches That Look Expensive
By Crystal Schwanke
Bakelite Jewelry: Guide to a Timeless Fashion Piece
By Kate Miller-Wilson
Easy Tips to Determine the Value of Vintage Jewelry
By Megan Cooper
How to Wear a Pocket Watch for a Timeless Look
By Kristin McCarthy
Unique Pocket Watches on Necklace Chains
By Crystal Schwanke
Typewriter Key Necklaces for a Vintage Look
By Terry Hurley
Understanding Markings on Jewelry
By Kate Miller-Wilson
80s Jewelry Pictures That Bring Retro Back
By Lovetoknow
80s Fashion Jewelry Trends to Inspire Your Style
By Crystal Schwanke
Examples of Bakelite Lockets to Inspire Your Style
By Sally Painter
© 2022 LoveToKnow Media. All rights reserved.
Autumn Birthstones for the Fall Months