More than 5,000 years after emerging as a culture, the ancient Egyptians are still influencing style and design. Pyramids aside, their most stunning contributions might be their jewelry: gold, ceramic, and semi-precious stones mounted on elaborate necklaces, rings, earrings, and more. The Egyptians wore jewelry for many reasons, from marks of status and love of beauty to personal protection and health.

Both men and women wore jewelry in ancient Egypt including earrings, necklaces, collars, rings, bracelets, and hair ornaments. Many examples are depicted on carvings and tomb paintings, but since the paintings were often done for wealthy families, the jewelry depicted was elaborate and expensive or created by the artists to show the taste and beauty of the deceased. 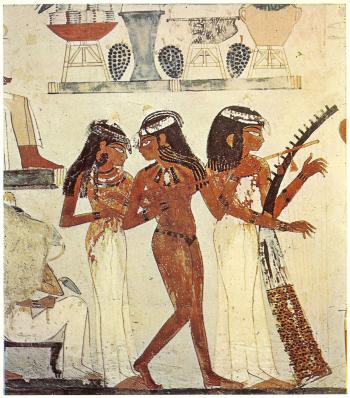 In addition to personal decoration and as status symbols, jewelry was also worn for protection and health since the Egyptians strongly believed in the power of gems and magic symbols to affect their lives.

Ancient Egyptian is nearly always one-of-a-kind since each gem or bead was different. There was no mass production as we know it, but workshops produced a number of common types:

Egyptian clothing was simple and included kilts for men, loose gowns for women, and very little for children and slaves. The body was adorned with jewelry quite early in Egyptian history, as with this gemstone belt (shown below), from the Predynastic era. 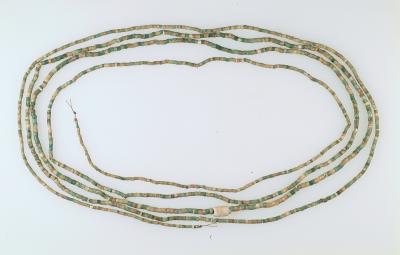 Bracelets were armlets or cuff styles. Kings (Pharaohs) were famous for their extensive jewelry collections: Rameses III wore these armlets, which are now in the Cairo Museum. This gold, glass and semiprecious stone cuff bracelet is from the New Kingdon period and has inscriptions about Pharaoh Thutmose III. 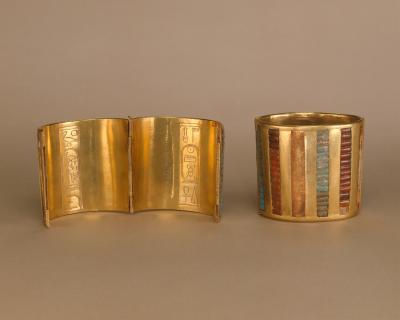 Necklaces ranged from simple beads strung on linen thread, like this necklace, with a carved fly, and amethyst and garnet stones, to spectacular pieces like New Kingdom's King Tut's falcon pendant. These First Dynasty necklaces hint at the color and designs that were prevalent in early Egyptian culture.

Collars consisted of hundreds of beads, strands of gems, and inlay work. These gold sheet collars used glass beads to imitate gemstones. Gold was more prevalent than silver since Egyptians had more access to the sunny metal; silver was more precious than gold.

Collars and other jewelry could be used to adorn the deceased. The Broad Collar of Wah, shown below, is a type of collar that might be used for burial. The lack of a strong clasp signifies that it was placed on Wah's mummified remains rather than worn in life. It is made from glazed ceramic beads and linen thread. 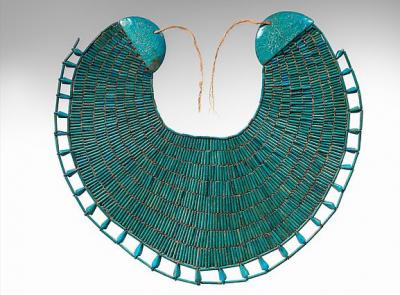 Rings (and earrings) came in gold, silver, inlaid, gems and glass. Sometimes they were carved with prayers to the gods or magic incantations for protection. This gold ring was from the Ptolemaic period (Greek period of the Cleopatras.) It was owned by a temple priest and shows the goddess Isis with her son, Horus.

Pectorals hung down over the wearer's chest. This example from King Tut's tomb (shown below) has the protective eye, scarab beetles, cobras, vulture/falcon wings, lilies and papyrus blooms, all which represent the king and his power over Egypt. This type of jewelry showed off the skill of the goldsmith and beadmaker, as in this example from the Middle Kingdom. 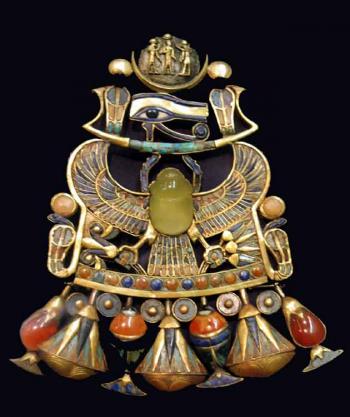 Pectorals were a type of jewelry commonly worn by the wealthier classes, and could be worn as a brooch or necklace laid across the chest. The pectoral below was part of a necklace from the reign of Senwosret II and was made from gold and expensive materials such as carnelian, lapis lazuli, turquoise, garnet, and green feldspar. 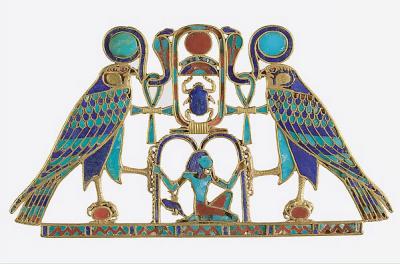 Wig decorations, like this New Kingdom example in gold, glass, and gems, were used by well-to-do women. The ancient Egyptians often shaved their heads for sanitary reasons but wore elaborate wigs when called for in celebrations or religious ceremonies.

The Egyptians were famous for mummifying the deceased, and even the dead had their own jewelry. These finger coverings, or stalls, from the New Kingdom were used to dress up the dead for their journey to the next world.

Amulets, while not strictly jewelry, were small objects carried or worn to protect the wearer from harm, preserve their health, or bring luck.

The Egyptians rarely made anything that didn't have layers of meanings. So, a necklace might have a falcon (seen in the natural world), but which also represented Horus (the falcon god) and by extension, the Pharaoh, who was considered a descendant of the gods and was protected by Horus.

Colors also conveyed part of the meaning: green meant health; red represented blood or strength; blue was rebirth; yellow suggested the sun or gods; white was purity and used for religious observances, and black was for death and rebirth. The colors in jewelry were drawn from the elements, gems, paint, and glazes that the Egyptians had available. Jewelry also depicted objects that had meanings beyond their shape: 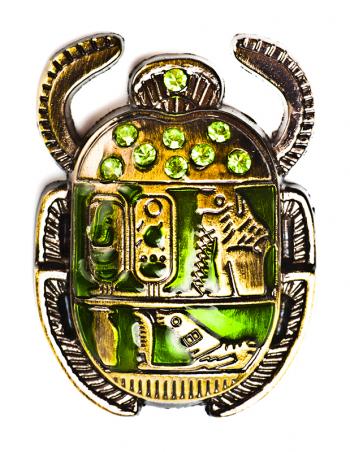 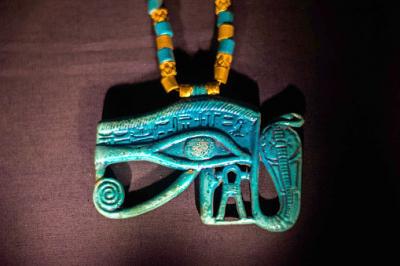 The Egyptians had hundreds of symbols, with many appearing on their hieroglyphic lists, and in jewelry designs. It may take time to decipher the meaning, but it's an excellent way to better understand how the jewelry was perceived and used by its original owner.

Ancient Egypt's history is defined by dynasties or eras defined by rulers as well as by changes in art, design, and personal adornment which appeared throughout the eras:

In between some of the dynasties were intermediate periods when Egypt faced political upheaval. But despite political changes, for more than 3,000 years Egyptian art and writing were used to celebrate pharaohs, gods, goddesses, and culture and influenced the design of their jewelry.

Ancient Egyptian jewelry still appeals to people thousands of years after it first appeared. If you want to enjoy wearing this portable art, there are many resources for locating original pieces as well as more affordable (and less delicate) reproductions.

The jewelry of ancient Egyptians held religious and symbolic significance and was treasured for its beauty and power against evil and death. It was buried with men and women because the Egyptians expected to enjoy wearing their finery in the afterlife. Today's lovers of ancient designs can still share in the enjoyment of this magnificent craft.