Amber is unique among gems. While its warmth and golden beauty are enough to attract, its origins in prehistoric times also create intrigue.

Amber is a hardened resin, or sap, that was given off by trees millions of years ago and became fossilized over time. It is usually colored yellow or brown, but is sometimes shaded reddish brown, black, green, or even blue. Throughout history people have used amber to make decorative objects, such as bottles, bowls, figurines and jewelry.

Where is Amber Found?

The majority of amber sold today hails from the Baltic Sea region, however it is also found in Italy, Romania, Burma and some areas of North America. Baltic amber has been traded for thousands of years. Throughout most of history, Baltic amber was found washed up on seashores, however in the 19th century mining operations began for this desirable substance. The Dominican Republic is another source of amber, popular because of the many inclusions found in the amber mined there. 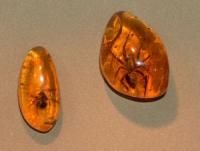 Not only lovely to look at, amber gives us a window into the past. A unique aspect of amber is that it sometimes contains flowers, seeds, leaves, pine needles or insects such as gnats, flies, mosquitos, bees and ants. These are referred to as inclusions in the amber. The insects became trapped and covered in the resin while it was still flowing, and once it hardened they were preserved inside. They were so well preserved, in fact, that some DNA is trapped inside the amber. This has been extremely useful for scientists, allowing them to study the ecosystem that existed millions of years ago. This type of amber is popular because it is harder to find, and it is often used to make interesting pieces of amber jewelry.

When used in jewelry, amber is usually cut and polished to give it a nice shine. On Moh's scale, which is used to judge the hardness of minerals, amber has a hardness level between 2 and 2.5. Amber is commonly used for necklace beads, pendants, in earrings, rings, bracelets and brooches. Although it is not a stone, it is generally used as any other gemstone would be used.

It is a good idea to educate oneself about amber before buying.

Be aware that some have attempted to pass off glass and plastic reproductions as real amber. Protect yourself by learning about amber and working only with reputable dealers.

Because of its relative softness, amber requires special care to keep it looking its best. Carelessly tossing it into a jewelry box is not a good idea, since the metal and gemstones of the other jewelry can scratch and damage the amber. It is better to wrap it in a soft cloth or cloth bag before storing it.

Remove amber jewelry when working with harsh cleansers and detergents, since these can be harmful. Avoid spraying perfume and hairspray on amber, which can permanently damage the finish. With a little extra attention, your amber jewelry will keep its beauty for years to come!